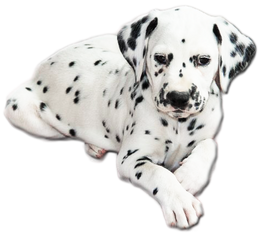 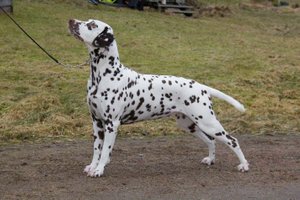 My name is Louice Hagman and it is I who have kennel Gåtfull's,

All my life I wanted to have a dog. In our house we only had cats and I did not know much about them, but it was the dog I wanted. I was the girl who was out walking with all the neighbors' dogs and pestered my mother to get a dog. She told me that you can buy when you have moved out. Yes, said and done, it was just that I did.

I would have a German Shepherd and would gain mass obedience prices and be the world's finest dog, but life wanted something different.

I got an internship at a dog boarding the outskirts of Gothenburg, at Onnie Bergland. Yes, she has kennel Pongoland which is a Dalmatian Kennel; I fell for these spotted dogs and there was no doubt that it was just such a dog as I wanted. Home Hum came after a lot of fuss to save money for my wonderful bitch. Hum was everything to me, I was so proud that she was in my life. Dog Classes would I go, for I did not know as much as I wanted. That changed when I came in contact with the dog club in Tanum. I went all the courses I could and had an interest, met lots of fun people and friends for life. Some of the friends I met Liz-Beth and Kurt Lilljequist who is the breeder of Newfoundland. They needed a kennel girl who could help them when there were exhibitions and puppy solutions. I was not slow to accept it, I have never regretted that I said yes. Today, we are close friends and we help each other so much, I have learned a lot about dogs, how they should look and how to care for them etc ...

Well then, I had found my area. It was exhibition and breeding, I wanted to do in the dog sport. There was only one problem, Hum was blue-eyed and she said definitely not to be exhibited. Hm ... it was time to find a show dog and breeding bitch, and so Pinglan came into my life. My lovely bitch who gave me my first litter. I bought her of Florence B Karlsson in Stenungsund (she lived there then), Kennel Jilloc's. Florence has taught me everything I know about Dalmatians. I have always been able to ask her a lot of quirky issues and I've got all the answers I needed.

She has always been very honest with me and prevented me from making stupid slip which I am eternally grateful.

So I took my first litter and it went really well. There were 8 puppies, three females and five males. I saved a male who was called Achilles (2009). Today he is not in my ground but an angel over me. What a wonderful dog I had done, he was my everything I loved that dog so much. Achilles even became champion, I'll never forget his first CC; I was totally confused when I got there so Asa Boholm Kennel Ridotto got to show Achilles in BOB and BOS for I was away and be happy. I thought, well not that I would show him more that I would not do ...

When Achilles was about 5 years I got the chance to get the Darling home to me that I had with Florence. She would have puppies at Darling. Well then, it happened a lot in the show ring, we won some and how much fun was not it? Darling and I had a really fun time, so I decided that I wanted a puppy for Darling. It took a while before Lovisa came but it was worth the wait - she is now the mother of my second Dalmatians litter "Back" hill.

Then the years passed, I felt that the exhibits is really what I am passionate about and I wanted to test me, so I decided that I wanted to take me abroad to look around and even work. The obvious would have been to go to a Dalmatian kennel but I felt it would not be such a big challenge, so it had to be a Newfoundland kennel instead, I came to Italy to kennel Cayuga of Manlio Massa. I am so grateful for that time, I learned a lot, perhaps above all, to take responsibility for what I did. I'm competitive so I toiled with these dogs, my spots were of course also but they were allowed to stand to the side a little more now than dogs I worked with.

There was a lot of work and little time but I still managed to get to know a little Dalmatians People in Italy. I was on some shows there and it was so-so. Achilles and Darling got some CAC was but in Italy you should have 6 CC and the time I had not, but that does not matter.

Then came the day I would go home, I just felt a day to now I've done my hair and my back was really tired. Then it was time to go home, I got my hands on a Volvo, and so I sat in it with all my life and drove home to Sweden.

Two weeks after I came home, I met my love Robert I now live with and we have a son named Nils, my beloved children. And my dogs.